Author: waytorussia (on 20 Jul 2015)
Tweet
During the Soviet times, there was not so much space for experimentation with forms and genres. Surprisingly, it was also the time when the two very important directors emerged in Russia: Andrei Tarkovsky and Sergei Parajanov.

Andrei Tarkovsky has famously called the art of cinema "sculpting in time". Time was the medium that Tarkovsky worked with. In his own words "continuity within a shot communicates the atmosphere" (the concrete life and the emotional content of the object filmed), while discontinuous sequences of shots (more in the Eisenstein's way) create the sense of fact and texture (faktura) that live and change in time. (from "Sculpting in Time" and "Elements of the Cinema") Tarkovsky believed that if one focuses on the main thing in the frame and removes everything that is not necessary, the atmosphere will arise by itself. In contrast to Eisenstein, Tarkovsky considered that the essence of cinema was not the juxtaposition of sequences engendering a third notion. Instead, he said that the "n-th shot is the sum of all the preceding shots [...] and this forms the sense of the shot in relation to all that precede it", which he considered the main principle of his montage. Thus, images do not only come in relation to one another, they actually overlay one another, creating a complex narrative texture and rhythm. That resulting rhythm was not so much about alternating and juxtaposing the shots, but giving them more time to unfold, playing with distances and planes within the shots themselves.

Such approach of Tarkovsky to montage and narrative would often result in dreamy sequences, full of the meanings that morph into one another, open for multiple interpretations, weaving in personal stories with historical narratives, fiction and truth, the everyday and the spiritual.


A certain degree of suspended tension (or nadryv) is constantly present in Tarkovsky's movies. The last scene of Stalker, for example, is full of that suspended tension on every level. The main protagonist, a mysterious working class man who guides people into the desolate zone for a spritual journey, says how tired he is from the writers and scientists who's lost their capacity to believe. The camera zooms out and we suddenly see all the books that he owns, a huge library, which completely changes our perception of this character, his background, and his motivations – at the very end of the film. The monologue of his wife that follows and the beautiful final scene with his child only add to complexity in the tension that they produce both on the level of narrative and in the actors' play.

Sergei Parajanov also masterfully used time, rhythm, and montage to create emotionally charged atmospheres in his films. While Tarkovsky made more of the philosophical fables, Parajanov drew his inspiration from ancient myths, freely playing with narratives, creating beautiful cinematographic series of images, one followed by the other, hypnotising the audience into a sort of spell where one came out of the cinema with a warped perception of reality: a more colorful, more sublime, and a more magical one.

His masterpiece "The Color of Pomegranats" is woven together from the ancient Armenian myths and the life of Armenian poet Sayat Nova.


If Tarkovsky was the Russian Fellini, Kurosawa and Bergman at once, then Parajanov was perhaps the closest to Alejandro Jodorowsky. What marks them both, however, was their never-ending quest for spirituality. Tarkovsky saw this as the ultimate goal of any artistic activity, which was an especially strong statement in the country where the prevailing communist ideology was supposed to replace the need for anything sublime and spiritual. Both directors were persecuted by state. Towards the end of his life Tarkovsky had to emigrate from the Soviet union, while Parajanov was put into prison on homosexuality charges for 4 years and was only able to show his films in the late 80s, right before his death. 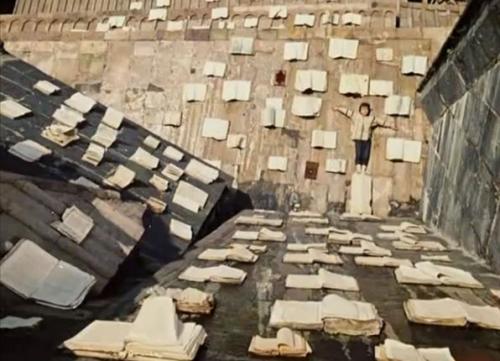