The Fiction and the Real: Russian Films of the 90s - The Palms, Brother, Harvest Time, Russian Ark, and Chetyre - Way to Russia Guide
Way to Russia >> What is Russia >> Russian Cinema >> 90s and 00s Films

The Fiction and the Real: Russian Films of the 90s - The Palms, Brother, Harvest Time, Russian Ark, and Chetyre

Author: Dmitry Paranyushkin (on 20 Jul 2015)
Tweet
There is a Russian saying: "when one cuts the forest, splinters are flying." The post-Soviet early 90s Russia was full of those splinters scattered around. The imminent collapse was predictable, but the scale of humanitarian catastrophe that followed was unimaginable. It was in this context that a semi-documentary called "Palms" by Artur Aristakisyan appeared. Filmed in Kishinev in 1993, the capital of the former USSR republic Moldavia, it documents life of homeless disabled people left alone in a Kishinev ghetto. 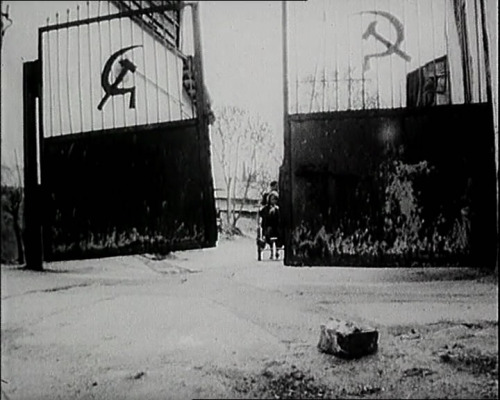 The narrator, Aristakisyan himself, is addressing his yet unborn child, showing him the world of those destitute people, explaining why they are going to kill him and never bring him into that world. It's a heavy film with beautifully raw cinematography, a true story of survival and the search for lost spirituality at the place where nothing else is left any longer. Apart from the social and historical context it tells the story of traces life cuts through the body, the multiple possible fates coming together within one's lifeline, an epic account of life as endless decay and suffering.

In his later work, "The Place under the Sun", Artur Aristakisyan lived for several years with homeless people in Moscow, literally becoming one of them in order to better understand and experience their reality.

Another Russian film from the 90s, "Brat" or "Brother" by Aleksei Balabanov.  Not very interesting as a cinematographic work, it's nevertheless an important film for anyone who wants to learn about the realities and aesthetics of the Russian 90s. The main protagonist who just came back from the war in Chechnya is facing a series of quite simple, but violent existential dilemmas that he resolves in a consistently brutal, but somewhat fair way. When there's no more hope, no more morals, no more ideals, the survival instinct kicks in. What's good and what's bad is decided on individual basis, but there is also a certain degree of personal freedom that comes with that. The ongoing thread of "Brat" is that cities make people weak, but what it juxtaposes to that weakness is the brutal force of survival instinct and, surprisingly, love.


After the tumultuous 90s, Russian cinema went through a sort of revival. Previously neglected theories of  Soviet cinema masters started to make their way back into Russia, bringing with them some a sort of aesthetic recovery. Moving away from the raw and crude footage of the everyday, the new generation of Russian filmmakers found their aspiration in the nostalgic storytelling, with a renewed sense of sincerity in their work.

"The Harvest Time" by Marina Razbezhkina made in 2004 shows a period of a life in a Soviet village, before the war. Filmed in Chuvashia (a Russian region close to Urals), it features beautiful pictureque views of the Russian countryside and carries with it the serenity that those landscapes bring in. That serenity is disturbed by the ever-increasing intrusion of the communist party machine and its daily routines into the life of people. The resulting tension, however, is resolved through that same serene landscape. Coming in terms with one's psychotopology, heritage, history, and the future. Beautifully evocative, spellbindingly reassuring.

"The Russian Ark" by Alexander Sokurov is technically a US film, but it's made by a Russian director in Russia. Very much related to Alexander Tarkovsky and Bela Tarr aesthetically and particularly for his masterful use of time, Sokurov created many more masterpieces, such as Faust (2011) and Moloch (1999).  He is perhaps the only contemporary Russian director who will be considered a "classic" in the years to come.
"Russian Ark" was filmed in one 96-minute shot at the Hermitage Museum in St. Petersburg in 2004. Not only it shows the rich beauty of the Tsar's Russia, but it is also an amazing account of Russian history, with all its ups and downs, tensions and exaltations.

"Chetyre" is an amazingly perplexing film made by Ilya Khrzhanovsky in 2004 after the screenplay of Vladimir Sorokin, perhaps one of the most interesting contemporary Russian writers. Showing the total weirdness of Russian life, “Chetyre” manages to grasp the extraordinary in every little snippet of the everyday. Totally absurd and grotesque actions clash with banality, sublime mixes with gore, and all this escalates into some cyclical self-replicating dance, which doesn’t have a resolution, but definitely has a very tangible impact on the audience.
In Khrzhanovsky’s own words: “This film is about life rolling over people like an asphalt spreading machine.


Ilya Khrzhanovsky is currently working on a new film called “Dau” about the life of Lev Landau – a prominent Soviet physicist and Nobel laureat. The new film is in the making since nine years already and there are some accounts that big parts of Kharkov (Ukraine), where it’s being filmed, were periodically covered with weird decorations, a city within the city, the actors infiltrating the real life and the film transforming the landscape. The rumours have it that the film is finished and that the director wants to premiere it in self-constructed temporary cinemas around the world, which will be burned after.

"The Return" made by Andrey Zvyagintsev in 2003 is a story of the two boys who are traveling to meet their father. It's a beautiful cinematographic work, touching in its intensity and the empathic capacity. Very much connected to the actual Russian landscape it manages to talk about things that are universal and in that it's one of the few recent Russian films that can have this kind of global appeal.