After the start of 2000s and the appearance of great films, such as The Russian Arc and Return, Russian cinema seemed to revert into a comfort zone and started to replicate Hollywood-like blockbusters.

Then something happened. Perhaps it was a wake-up call related to recent political events or maybe it was just the beginning of a new iteration. Regardless, several critically-acclaimed films have come out from Russia during the last years. What sets them apart from the rest is a highly critical stance towards the current political situation. Shot in a truly dystopian way, they almost aestheticize​ the bleak present and future. Whether it's a protective mechanism ("we're all going to die, so let's at least make it beautiful") or a clever sacrifice of the Russian funding and box office for the sake of international markets, those works, nevertheless, serve a very important function. They bring to the surface and to the public discourse all those hidden tensions that pervade Russian society today. And even if the resulting outcome has no hope, it may be much more efficient than the standard "happy end" anesthetic approach which makes it much harder for people to move and actually do something. 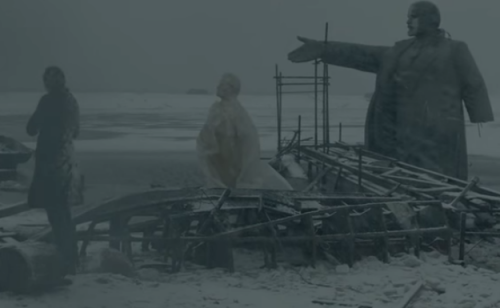 One great example of this new wave is the film called Leviathan by Andrei Zvyagintsev (2014). Zvyaginstev has already been known for his beautiful film Return, but with Leviathan he has entered into political terrain in a way that was less metaphorical and more direct. Showing the struggle between a man and a state, the story of Leviathan has many allusions to Putin's Russia. However, the interesting fact is that the script of the film is based on a real story from Texas, where a local farmer was trying to fight the authorities who wanted to take away his land. So in that way the story of Leviathan has impact beyond Russian borders even though it's received most of its critical acclaim in the climate of anti-Putin rhetorics during the Ukrainian war.


Another example is Under the Electrical Clouds (2015) directed by Aleksei German. Set in 2017, exactly 100 years after the Russian revolution, Under the Electric Clouds is an anti-utopian vision of the future that is deprived of the previous fervor and energy, the future that's going from nowhere into nowhere, trying to find its place in between.

During the Soviet times, there was not so much space for experimentation with forms and genres.
Russian Cinema Guide:
This free independent travel guide to Russia exists thanks to the commission we get when you order these hand-picked trusted third-party services or when you buy our book. Please, support us!